An unknown author once said: “Marriage is like a deck of cards. In the beginning all you need is two hearts and a diamond. By the end, you wish you had a club and a spade.”

Saul Antin said: “In business partnerships and marriage partnerships, O’ the cheating that goes on!”

Robert Anderson wrote that “In every marriage more than a week old, there are grounds for divorce. The trick is to find, and continue to find, grounds for marriage.

Marriage and relationships are complicated. They are hard. They take work, and commitment. So much effort goes in to trying to enmesh one’s life with another. To staying connected and committed. To loving that other person, even on days when we despise them. For anyone who has never been married or in a committed relationship, that might sound harsh, but – it’s true. In the epic words, of the band, the Plain White T’s – “Hate is a strong word, but I really, really, really don’t like you.” Some days in married life – this is exactly how we feel.

And as I shared the last time I preached, unfortunately, I am a living shining example, that some days the efforts made just aren’t enough and the complications are more than the relationship can bare. 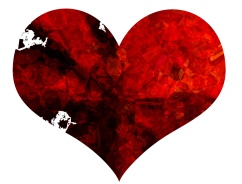 The relationship shatters, and we have to pick up our portion of the broken pieces and try to put them together in some sort of new semblance of life that will never be quite as shiny or quite as pretty, or quite as perfect as it was before the fracture.

The reasons for fractured relationships are vast and varied – communication issues, financial disputes, complete lack of common interests, abuse, neglect, boredom, adultery. Whatever the reason – sin is present, and the relationship breaks. In fact, in many theological circles, sin is defined as just that – broken relationships. A broken relationship between us and God, between each other, and with oneself, internally. Our actions, behaviors, and their end results (such as adultery and divorce) are manifestations of the ultimate underlying issue of sin through the breaking of relationships.

Adultery and divorce are not a new phenomenon… as the passage from Matthew goes to show, they have been a consistent aspect of human relationships for a very, very, very long time.

When Jesus begins his discourses on both topics, he begins by referring to ancient Jewish law – which also goes to prove how long these have been issues.

He states – “You shall not commit adultery” which is a direct reference to the 10 Commandments. When he states “It was also said, ‘Whoever divorces his wife, let him give her a certificate of divorce.’” he is directly referencing laws given to the Israelites in the book of Deuteronomy.

When he speaks to these laws he is engaging societal rules and understandings that are very familiar to the people around him. Ingrained even. The Pharisees and Sadducees have reinforced for generations, that these are the rules that God has given and humanity must follow in order to earn God’s favor. These rules were extensive, at times unjust, and almost impossible to follow.

In ancient Palestine, as well as today, this text can be very discouraging, disheartening, and condemning for those in a relationship and even more so for those of us who are divorced.

Jesus said that everyone who looks at a woman with lust has already committed adultery. Uh oh! How many people who are either currently in a relationship or have ever been in a relationship, can honestly say, that while committed to said relationship, they never noticed another attractive man or woman? Yeesh. Busted.

Then Jesus goes on to say that anyone who divorces his wife, causes her to commit adultery; and whoever marries a divorced woman also commits adultery. This does not give much hope to people, who are in fact divorced. Or people who fall in love with a divorcee.

But the thing is – this is not a passage that can be looked at completely through the lens of modern society. That would be comparing apples and oranges.

These ancient laws were common, accepted, widely practiced, and as I said before – often unjust. They were horribly oppressive to women. In some parts of the world, horribly oppressive laws, such as these, are still widely practiced, however, in most of western society, anyone can commit adultery and anyone can initiate a divorce. This was not the case in Ancient Palestine.

Society at that time was extremely patriarchal and misogynistic. Women had little value and no rights.  Adultery was considered predominately an offense committed by a woman. Men could live promiscuous lives so long as they did not act on their passions with a married woman. This promiscuity was considered immoral by some, not all, but it was not adultery. (So – no stoning to death happening to those guys.)

However, a married woman, who engaged in any kind of extramarital sexual relationship, consensual or not, was an adulteress. Rape culture is a horrible horrific problem now, but pales in comparison to that of Ancient Palestine.

Written proof or a certificate of a divorce could offer a small measure of security for a discarded woman so that she could remarry which was her only way of securing safety and preventing her from living a life of destitution and poverty. With that said, divorce still carried a certain stigma, and even those women who remarried were often not treated with dignity or any measure of kindness by society.

So, when Jesus makes his statement about adultery he is not solely blaming women for the act.  He is placing all of the ownership and responsibility on the shoulders of the men. Those with status and power who should have been protecting the vulnerable. This viewpoint was very contrary to the accepted societal norms and very unfavorable with the traditional and staunchly literal religious authority.

And again, when Jesus speaks to divorce he is placing the responsibility on the shoulders of the men. Shifting that responsibility and blame from the powerless to the privileged powerful. Jesus is being a radical advocate for women, championing those victimized by patriarchy. Jesus, like Robert Anderson, is saying – yeah, you can find a reason to divorce your wife. But really, you should be searching even harder for reasons not to.

With all of this said – sometimes – the sin is too much, the relationship is just too broken and nothing will save it. So what then? No more happiness? No more love? No more relationships? No remarriage?

And every person in a committed relationship who is attracted to someone other than their significant other is really an adulterer? Because if that is the case – O’ the cheating that goes on! 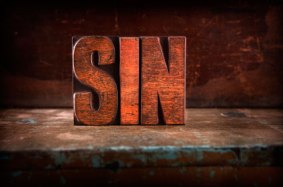 Are these things really sin? Are we really all horrible, broken do
wn, hot messes, of sin filled misery?

The unpleasant answer is – yes. Yes, adultery and divorce are sin. They are blatant manifestations of broken relationships with others, within ourselves, and with our relationship with God.

When attraction hits, even for a brief moment, it alters our relationship with our significant other. Divorce is a prime example of broken relationships and sin. So, as much as it is unpleasant and uncomfortable to admit, as much as we wish we could claim otherwise – We are all horrible, broken down, hot mess filled sinners.

Jesus is making it very apparent that this is the case to the people and to the religious authority. He is pointing out that it is impossible for anyone to be whole or righteous on their own. However, this is not a lesson of eternal condemnation. It’s a lesson of need.

God has not condemned you, or me, or anyone else, to a life of solitude and loneliness. God is always with us. In our mistakes, our heartbreak, our sorrows, as well as in our abundant joy, God is present.

God came into this world and acted in love so that we might love. Through his death and resurrection Jesus took on the burden of sin – of all of those horribly broken relationships – and lavishly gifted us with grace, compassion, forgiveness, and redemption. And we need this.

God is in the business of giving us additional attempts at getting it right.  Christ died that we might live and live abundantly – in love and in relationships.

God did not entrap us in an ancient system of laws, protocols, and cultural oppression.  God liberated us. So, when we fail, when we reach the point of awful, shattered, disrepair. When we are horrible, broken down, hot mess filled sinners, God forgives us. God gives us another chance.

So, rejoice that we get another chance. Rejoice that Christ took a radical stance of advocacy. Be grateful that Christ liberated us from a never-ending system of oppression and failure. Be grateful to not be banished to a life of solitude and loneliness. Be grateful for abundant life, for happiness, and for additional chances to love and to be loved.