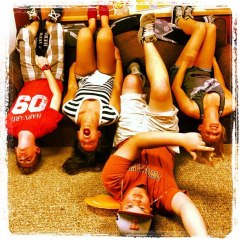 Last spring I sat in my office on a Sunday afternoon with no idea as to what I was going to do for youth group a few hours later. It had been a busy week and I hadn’t found the time to plan or prep anything. Instead of concentrating really hard and coming up with something brilliant, inspiring, and faith forming, I decided to procrastinate and opened up the latest edition of either Group Magazine or Youth Workers Journal.  (I honestly don’t remember which one it was… I subscribe to both). Inside was an article written by a Youth Minister who had done an “Instagram Night”.  Their night involved youth logging into their accounts, then spinning a wheel which had different options of what would happen.  One option was for the youth leader to randomly delete some of their Instagram friends. Another was for the youth leader to turn a picture that could be construed as inappropriate into a “teachable moment” by showing it to the group and discussing.  This whole thing honestly kind of horrified me and struck me as incredibly invasive.  The general idea behind it was great. The execution, maybe needed a little work.

In my previous vocation I worked for a public school district in the Curriculum and Development Department, so understanding the importance of integrating technology into ANY educational environment is pretty ingrained in me.  Facebook, Twitter, and Texting are the best platforms for getting information to my youth and their parents. I figured if those could be used as ministry platforms, why not Instagram???  Just in a non-invasive, non-judgmental, non-threatening way.  Considering I had nothing else planned for that evening, it seemed like a great idea to pursue. CHALLENGE ACCEPTED!

I’ve done photo scavenger hunts previously where the youth used their cell phones to take pictures around the church. In those instances we all had to hover around whoever’s phone had taken the picture to see the image. Fun, but not super effective.  I applied this concept and created an Instagram Photo Challenge.

Youth were split into teams and instructed to create a “Team Hashtag” to be attached to each image along with the hashtags: #instagramnight & #reformation365 (our youth group name).  Each team was given the Instagram Photo Challenge Sheet and sent off to get down with their creative-technology-rearing-bad-selves. The results were imaginative, creative, and some just downright hilarious! (Especially the image where I was recruited to represent Goliath… if you’ve ever met me in person, you know that I’m 5’2” and super petite… oh the irony!)

I used this again just this past weekend during our annual 30 Hour Famine. It was a great activity for the youth in the late afternoon of day #2 when everyone was hungry, tired, and dwelling on how much longer until we get to eat.